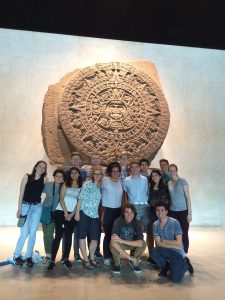 SPN 320 Power and Negotiation in Early Modern Visual Culture: A transatlantic exploration of the visual culture of early modern Spain and its Spanish American colonies between the years of 1492-1700 paying special attention to the pictographic colonial  manuscripts produced by indigenous artists of Mesoamerica.

SPN 395 Designing Empire: Plazas, Power, and Urban Planning in Habsburg Spain and its Colonies: This course approaches the comparative issue of the city in the Habsburg world, focusing in particular in Spain, the Viceroyalty of Peru and New Spain, and the Spanish colonies in Asia. The common denominator is the political construction and alteration of urban public space—how old communal spaces were remade into Baroque showcases of monarchical power and how, in overseas territories, urbanism was the cornerstone of monarchical legitimacy. Our end point will be the Baroque city of the seventeenth century and its transformed look, from grand public plazas to royal citadels and new fortifications. We will explore the political motives and economic implications of such spatial redesign. Our analysis of colonial cities in America and Asia  address indigenous representations of urban spaces in Mesoamerican códices and how these artistic forms were adopted and adapted in colonial documents. Students will understand how sacred indigenous spaces were repurposed and redesigned to enforce religious and political conversion in the recently conquered communities.

The views and opinions expressed on individual web pages are strictly those of their authors and are not official statements of Grinnell College. Copyright Statement.